Whether mid-pandemic or basking in prime times, watch brands each year find themselves embroiled in a fierce battle for supremacy. The prize: a place on the most wrists. It’s a contest involving a familiar cast of suspects, with Swiss export figures and yearly production numbers giving us a clue as to the pecking order of the world’s favourite watches and confirming the resilience of the most popular brands.

Thanks to covid-19, the figures this year will be down on those, so the stakes will be raised proportionally. Which raises the question: What guns are these well-known brands bringing out to protect their popularity and ranking? The most powerful brand of all, Rolex, has so far been a no-show, having postponed all new product launches to date. It’s hardly an issue for a brand whose most popular sports models are enjoying ongoing demand and remain wait-listed or in short supply. However, Rolex has just announced it will be releasing fresh 2020 models after all, in September. Meantime, sister brand Tudor has taken up the slack, launching a 39mm Black Bay Fifty-Eight model in a new colour, blue, and speeding its acceptance with an Instagram campaign featuring David Beckham. This has helped make the watch one of the most talked about this year. The watch is water resistant to 200 metres, has a self-winding chronometer-rated movement with ample power reserve, and comes in at around $4900. Omega has newcomers in the pipeline but in the meantime, there’s this screentime gem to console you, the watch created for Daniel Craig to wear in the delayed James Bond movie No Time to Die. Available at Omega boutiques, this special-edition Seamaster 300 features military touches such as a UK Ministry of Defence ‘broad arrow’ on the dial, while happily consigning the more overt Agent 007 stuff to the caseback. With a 42mm case in titanium with matching bracelet, a master co-axial movement powering things and 300-metre depth rating, it’s a nice change from a Speedmaster and a handsome tool, yours for around $14,000. Tag Heuer has just released a 2020 range of Carrera models it hopes will keep it in the mix.  But it’s the limited-production models referencing the brand’s racing past that continue to win over enthusiasts, the most recent being this Tag Heuer Carrera 160 Years Montreal Limited Edition. It’s a politely sized (39mm) creation paying homage to a 1972 Montreal timepiece that sported similar colourful touches. What’s new is a self-winding column-wheel chronograph movement and a bit of exclusivity, with just 1000 pieces on offer. For that you’ll pay around $10,000. 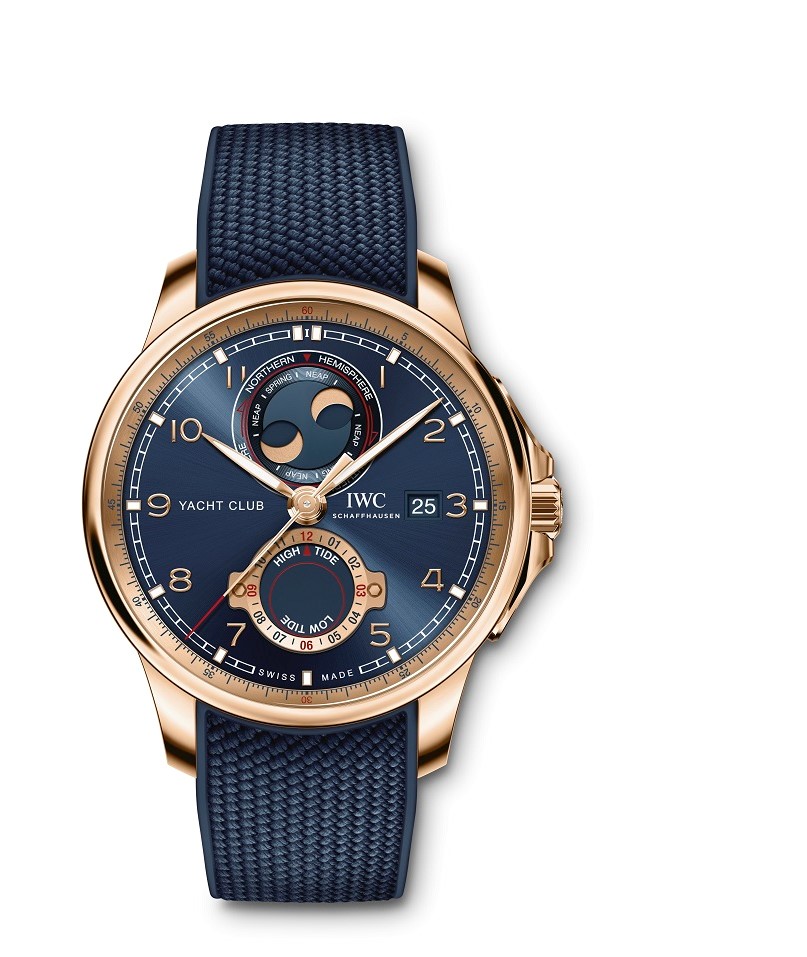 For IWC, 2020 is the year of the Portugieser, the oversized watch that has featured in the brand’s catalogue since time immemorial – well, since the 1939 original – and is now a comprehensive range. The latest Portugieser Yacht Club edition adds a useful feature – it gives information on high and low tides ––and, astonishingly, is said to be accurate to within 10 minutes in 100 years. The blue dial with double moon-phase display certainly pops, while the gold 44mm case is probably overkill, but hey… A self-winding movement provides 60 hours of power reserve, and the price is in the low $50,000s. The ‘wristlet’ watch Louis Cartier created for Brazilian aviator Alberto Santos-Dumont in 1904 was such a success it’s helped keep the brand top of the pops ever since. That’s 116 years over which to amortise the design costs – not that the Santos-Dumont hasn’t been refreshed countless times. For 2020, this hand-wound Santos-Dumont XL model in steel with a gold bezel will carry the Santos flag, its case curved to sit comfortably on your wrist – handy, given dimensions of 46.6mm by 33.9mm. Around $12,000. Aside from Omega, the Swatch Group houses hit-makers in Longines and Tissot, the former’s Heritage watches among the most faithful retro editions you’ll find. (Ask to see our 2020 favourite, the Longines Tuxedo – which we’ve featured on BusinessDesk –  or the Spirit range next time you’re in store.) As for Tissot, it’s a brand that caters not only to your wrist but your wallet. A newcomer for 2020 is the Tissot Supersport Chrono Tour de France. Given Tissot is the official timekeeper and official watch of the race, it’s no surprise the 45.5mm-diameter quartz chronograph flaunts the red and yellow colours of the Tour, while the subdials provide an allusion to bike wheels, according to the manufacturer, and a yellow bicycle features on the counterweight of the seconds hand. You get the picture, and it’s one you can hang on your wrist for just $700 or so.

Given you probably won’t be making it to the Tour de France this year – or anywhere else abroad, for that matter – maybe one of the above timepieces can at least give you something fresh to look at on your wrist. You can be sure your favourite brand will be counting on it…

ABOUT THE AUTHOR
Bani McSpedden
Watches writer
Bani is one of the world's foremost watch experts and is also watch editor for the Australian Financial Review
Latest articles
Aston Martin and Ford Mustang-inspired luxury watches are the new status symbol
Luxury watchmakers are taking the Mickey to get your attention
It’s time to shine: exclusive watches send a message on your place in the world
Rolex to Bell & Ross – what's new in the luxury watch market
Luxury watches – Rolex, Breitling and Tag Heuer go green
Luxury watches – the best new timepieces of 2021
RELATED