My Net Worth: Tony Falkenstein, entrepreneur and CEO of Just Water

Tony Falkenstein is a veteran businessman and entrepreneur and currently chief executive of NZX-listed Just Life Group, which owns the water-cooler business Just Water. An advocate of teaching business skills and entrepreneurship in secondary school, he was behind the establishment in 2003 of a business school at his alma mater, Onehunga High in Auckland. Five years later, he was inducted into the New Zealand Business Hall of Fame. He’s also the founder of the Entrepreneurs Organisation NZ, a network of potential business “stars”, and is an officer of the New Zealand Order of Merit, a royal honour granted for his services to business.

I grew up in Auckland and my parents were German immigrants. I had an older brother and an older sister and we all had to work.

Back then, I was not just shy, I was exceptionally shy. And I still call myself an introvert. I only went to university because a friend of mine told me about girls. This friend of mine said, ”Listen, do accounting. Everybody passes that.” So I did.

As soon as I finished, I went off and did my OE. I went to London and thought I was pretty smart with my BCom in my pocket.

I found out that it wasn't so easy. I got a job working for an accountant’s office and I hated it. But then an agency rang me up and said, “Listen, if you can go to South America on Monday (this was on a Thursday), we can interview you today for something.”

So, I joined a company called Holiday On Ice. I flew down to Lima, Peru, and spent a year with that show. I was the administrator; there were really only two of us in the office. It was great – I didn’t even know what gay guys were. I’d write home and just say, “Man, these guys put their arms around you and I just can’t believe it, they’re just so nice.”

When I came back, I got a job as finance manager of Polaroid in New Zealand. I’d been to learn from the finance manager in Australia but after the first month, I rang him up and said, “Listen, I'm a fraud. I’ve got my accounting textbooks, but I've got no idea.” He said, “Well, Tony, I’ll come over. Do you like the sales and marketing area? Just start slipping into that and I will manage this.”

I was about 23 when I had this insight that I thought differently from everybody else. Suddenly I realised that I had an entrepreneurial mindset.

I became quite a hero at Polaroid and was general manager of New Zealand at the age of 29.

Then I was offered a job by Peter Masfen. He’d bought a stake in Optical Holdings, which made sunglasses. I had this idea to make bright-coloured sunglasses with well-known designer Jonathan Sceats. We sold them in lots of 20 in the UK for £50 each and they cost about $7 to make!

I took an ad in Vogue magazine, which cost £10,000. We got my sister-in-law to go past London optometrists each day with the Vogue ad and ask, “Have you got these glasses?” They sold out!

When I started in Optical Holdings, the shares were 38 cents. They went up to about 80 cents, and even before that, Peter Masfen would say, “I’m going to keep buying. If you want to come in, you’re welcome.” Oh, he was so very fair. But I just didn’t understand the whole thing. When it got to $1 a share, he said, “You should buy, you know. This is a $3-a-share company.” And I still didn’t. When it got to about $3, he said to me, “Tony, you and I know this is $5-a-share company. I’ve made an appointment. You are going to get a loan, if you need, and buy some shares.” When I sold out, it was at $12 a share! 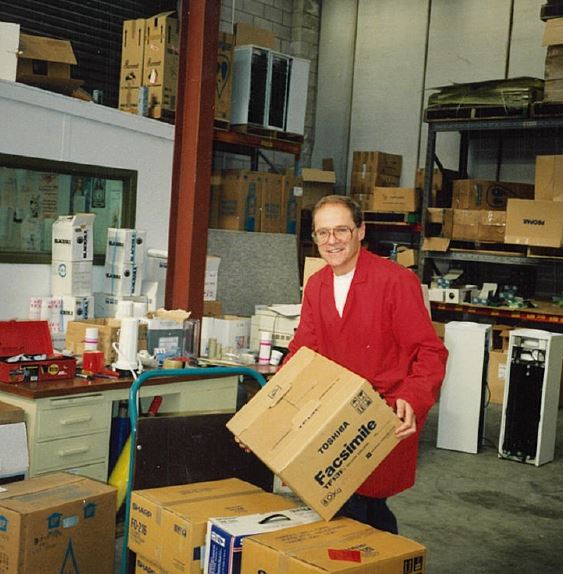 Then I decided to do my own thing. I’d seen the Swatch watches and their success in Europe and America. But I couldn’t get the licence here, so I went to Hong Kong for a similar product. Then we rang up the reception of the Swatch importer here and found out all their market information and we were off!

We did everything a bit better. We got more models, more colours, more designs, lower pricing – the Swatches were $69 and ours were $49, and these things cost less than US$5. I had a two-year guarantee, they had a one-year guarantee. So, between September and December, we sold 27,000 watches. I’d done a screaming great marketing job.

But the wristbands got brittle over just a few months, so when the kids put them on for Christmas Day, they snapped immediately. It was an absolute disaster. A low point in my business life.

It was big learning curve – my biggest disappointment. I lost everything I had made from Optical Holdings and was down to considering selling our house.

But then a guy who had been the auditor at Optical Holdings and didn’t know about the watch business said, “We want you. Come on board and we’ll give you a $100,000 signing-on bonus.”

My mother said, “These people must be on drugs!” It was a crusty old South Island trading firm, Unity Company.

I had this idea to rent fax machines, but the company was eventually moved into receivership and I was asked after the sharemarket crash of 87 to buy what I had called Red Eagle Corporation.

I've often said – and would still say – that if I had my way again, I never would have gone into my own business. Once you’ve made it, it’s sort of a nice time in your life. You’re married, you have a child and all that – but then you suddenly go back to the beginning again. Never doing anything but being in the warehouse. And all that risk.

In about 1989, I’d seen water coolers in sitcoms and thought New Zealand was getting more healthy, so Just Water grew from there.

My business advice would be to focus. It’s really doing what you're good at, or something that you want to be good at.

I'm an avid tennis player. I play tennis three times a week, and I do Pilates. I think I’m the fittest I’ve ever been.

The last thing I splurged on was a Tesla. And my CFO cannot understand it. But the reason I bought it was that I hate going to petrol stations. And I hate the fact that every year, you drop your car off and there’s a $2000 bill for servicing.