How I became an overstayer

Last year Dave and his family were on the run after being dobbed in to authorities. (File photo: Getty)
Jem Traylen
Wed, 25 Aug 2021

He was appearing in front of the petitions select committee with about 60 fellow Tongans who were gathered in the ornate surroundings of Parliament’s old legislative council chamber.

Most of them had flown down from Auckland to witness an impassioned request from members of the Pacific Leadership Forum (PLF), which had collected 35,730 petition signatures pleading for pathways to residency for overstayers.

Their simple message was a deliberate allusion to that used so often by the prime minister: “Be kind to overstayers.”

Last year while the country was breathing a collective sigh of relief as our first lockdown ended, Dave and his family were on the run after being dobbed in to authorities.

His story, as told to BusinessDesk, might confound some people’s perceptions of overstayers.

He has lived here since 2001, working hard to keep his family afloat and paying an estimated $200,000 in taxes without the backup of the welfare state to draw upon if needed.

Dave initially came here on a scholarship and stayed on legally to work as an assistant accountant.

After his visa ran out in 2005, he made what’s known as a section 61 application – a kind of final prerogative of mercy entirely at the minister’s discretion – but was unsuccessful.

But in many ways, his life carried on as normal for the next decade: working a full-time job and paying taxes didn’t make him feel like he was an overstayer.

Then one day he lost his beloved accounting job and the reality of his illegal status sank in.

Then the struggle began. With 13 years of experience under his belt he thought he would be OK.

After all, there were dozens of similar roles being advertised every week, but, as he puts it: “I failed at the last hurdle” when employers asked to see his passport.

For the next four years, the family scraped by.

Dave had a small side business helping people file tax returns and his legally settled daughter contributed her student allowance.

However, things went from bad to worse when he received the call that Immigration NZ was about to come knocking.

At first the family fled, but eventually the authorities caught up with them and they were given seven days to leave the country or face deportation.

For the second time in his life, he applied under section 61 but this time he had a whole family depending on the outcome. 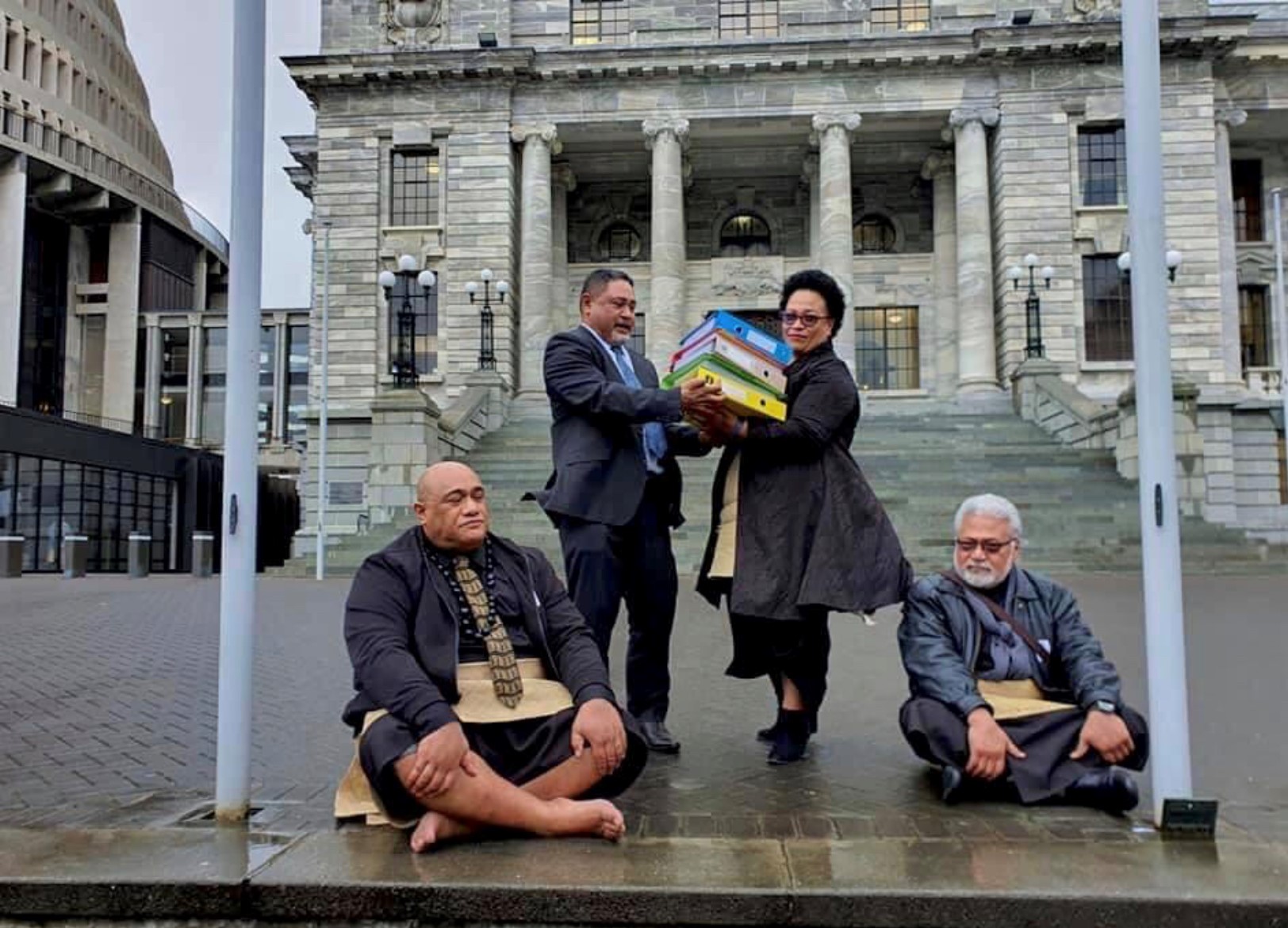 A member of the Pacific Leadership Forum performing a traditional process of behalf of overstayers seeking forgiveness for breaking the law. The petitions were presented to MP Anahila K Suisuiki. (Image: Supplied)

The same sword of Damocles hangs over an estimated 14,000 illegal migrants.

Immigration NZ’s data is understandably a bit ropey, and four years out of date, but it’s the best number we can put on the scale of the issue.

Perhaps surprisingly, in the last financial year, 3,746 of them were successful in their section 61 bids to become legal, although 94% of these were for visa extensions and only 225 were for residency.

Immigration adviser Tuariki Delamere said the figures do not tell the whole story as they included “inadvertent” overstayers such as applicants who filed before their visas expired but were then asked to provide additional documents.

These are almost all granted visas if they re-submit with the correct documentation.

Delamere was once the minister of immigration himself and had to rule on such applications.

His understanding is most residence grants are for partnership applications, and the overall numbers of long-term overstayers who are successful are very low.

Nearly one in five overstayers come from Tonga and the PLF’s Maka Pailate explains to the select committee that, as the largest overstaying group, they feel a special responsibility to speak out on behalf of them all.

Pailate told the politicians there’s a misperception overstayers are a burden on New Zealand. They believe about two-thirds of them are in the workforce and contribute an estimated $124 million per annum in GST and PAYE.

They are the cleaners working quietly in the background of our frontline hospitals and nursing homes.

They are the farm workers sustaining the export industries that are keeping the economy afloat.

They are the hammerhands helping to ease the housing shortage and the labourers digging away on ‘shovel ready’ infrastructure projects.

He believes more would gladly work, filling the labour shortages in the economy, if the fear of deportation wasn’t constantly hanging over them, and those who are already working would become more productive.

“All they're doing is just a basic job that they can have access to and don't have much choice to look around: can I get a better job, rather than this one?”

He said he is aware of overstayers working in construction who are "very high skilled in this particular industry, I know this for a fact”.

They are stuck in the most basic roles, missing out on opportunities to grow: “If you haven’t got paper, that’s all you’re getting.”

Alan McDonald from the Employer and Manufacturers Association (EMA) said the potential for upskilling was one reason employers support the call for an amnesty on overstayers. The second was to address the exploitation that they are aware is happening.

“Because of their status, it does leave them vulnerable to exploitation, and we know that happens.

“One of the advantages of being able to fully participate in the workforce, take them out of that black and grey economy, which is where many of them tend to sit, is that then you've got the full protections of the workplace employment legislation.”

“It's great to see that the employers and businesses are also calling for it.

“We don't really have a huge number of people unemployed in New Zealand and those skill shortages will need to be filled by migrants, so an amnesty for overstayers makes absolute sense right now.”

More sense perhaps than deporting overstayers in the middle of a pandemic and during one of the tightest labour markets we are ever likely to see.

At least Dave’s story ends on a happy note – his family’s 16 years of precarious living finally came to an end earlier this month when his section 61 bid was approved.

He told BusinessDesk that he began filling out job applications the very same day.

“Hopefully by the end of this next week, I'll be back on board, doing what I love, doing the accounting work.”

*BusinessDesk has agreed to keep the man's identity confidential. Dave is a pseudonym.

ABOUT THE AUTHOR
Jem Traylen
Reporter
jem@businessdesk.co.nz
Jem has previously worked in tertiary education and government policymaking. She has a masters in economics from the University of Canterbury and is currently completing a postgraduate diploma in journalism at Massey Wellington. You can follow her on Twitter @jemtraylen or connect with her on LinkedIn here.
Latest articles
Immigration will be a tricky balancing act
Faafoi tight-lipped about overdue immigration reset
Delta schmelta: Treasury forecasts early return to surplus
Treasury's doubts about Kāinga Ora’s $2B war chest
Most govt depts spending more on consultants
RELATED